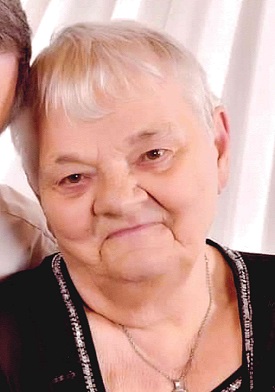 Opal Marie Bos, age 82 of Colfax, passed away on Sunday, May 17, 2020 in Newton. Private family funeral services will be held at the Howard Street Christian Church. Burial will take place at the Colfax Cemetery. There will be an open visitation on Wednesday from 5:00 - 8:00 p.m. at Coburn Funeral Home in Colfax. Memorials may be directed to the family and condolences may be left at www.coburnfuneralhomes.com

5 people have supported the family by purchasing them flowers or gifts from the Healing Registry.

Sorry to here of the loss of Marie. I know she will be missed by many. Loosing a parent is the hardest to get over. We will be sending out prayers for all of you. God Bless

I worked with Marie at JCCF/Integrated Health Services in Newton for 9 years. For the last 3-4 years I was the director of the unit she worked on. She had a great heart for both staff and residents and we never had to worry about her doing her job. She was a good shift supervisor and I'll be and even better grandma/mother, etc. One of the things I remember most about her was her "Missouri" language (I called it) saying things like "warsh" for wash. Lisa and I enjoyed working with her very much!!!

We want to express our deepest sympathy for your lost. Marie was a good sister-in-law - kind, caring & joyful to be around. Our thoughts & prayers are with all of you. Janice & Mervin McGee

Anna and family I'm so sorry to hear of your Mom and grandmothers passing there is comfort knowing she is no longer in pain and surrounded by those who have passed before her. Scott Mikkelsen

I worked with Marie for many years at the care facility. She was so sweet and loved by staff and residents. Prayers to all who knew her.

Marie was such a beautiful soul and was always very kind and loving towards me. She has always treated me like family. I will miss you, sweet Marie. Rest easy with the angels!

I loved Marie even though we hadn’t seen each other since Ashley and Jaci’s wedding. We worked together at the care facility for many years. My condolences to all her family.

Loved working with Marie at JCCF. You were a great friend.

Marie was my boss at JCCF. She was very caring and a great person to work for! I thought of her often after I left that employment and wandered how she was doing. My sincere condolences to her family for the loss of this remarkable woman. May Marie rest in peace.

So sorry for your family’s loss; grandmothers are such special people to a family. May you keep her memory alive through carrying on the traditions you created together!

I worked with Marie at JCCF. She was always very kind and caring to me. I'm sorry for your loss and I hope you can find peace and comfort in this difficult time.

So sorry for your loss prayers to all. She was such a great person and loved everyone.

So very sorry. Evert time I visited Colfax I found a small house full of people -- and love, Unconditional love. And the same has been true of holiday gatherings at the arboretum and parks. I know that will continue because you had a good teacher. And thank you for making Hannah a part of you. We've learned in the last five months that Grandmas never go away. They go on in the hearts and minds of their families and everyone they've touched in a life well lived. You carry on her spirit well. Please feel good about that and God bless you all.

Will miss Aunt Marie so much..she was always so welcoming and loved us unconditionally..she became like a second gramma after my gramma ( her sister Bonnie) passed away..

The attached photos are added to the memorial of Marie Bos to help share their legacy.

Please help memorize Marie Bos by recording your attendance below.

Thank you for sharing your memory of Opal