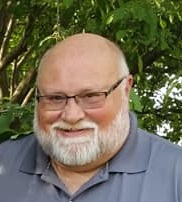 David Michael Schmidt was born on February 14, 1954 to Mary Louise (Franz) and Laverne Schmidt. His childhood years were spent in Sterling, Aurora, IL, Des Moines, IA and Golden, CO. He graduated from West Aurora High School in 1972 and Drake University with a degree in Economics in 1976 despite discouragement from his father whose depression era sensibilities thought leaving a position as a restaurant manager to pursue further education was an unwise decision. He succeeded in disproving this notion with a dedicated career as a life insurance underwriter at Farmland, Kirke Van Orsdel, Wells Fargo and finally retiring from Principal Financial at age 60. He provided his family with the material stability he could only dream of as a boy.

In August of 1978 cupid struck Dave with what must have been a quiver full of arrows at a slow pitch softball game in Prairie City, IA. Karen Birkenholtz was equally stricken and by the end of the evening they both knew they had found their life's love and partner. They married on November 12, 1978. On May 19, 1981 a daughter Natalie Marie was born. After several years, having noted they achieved perfection on the first try, they declared their family complete. Dave devoted himself wholly to the happiness and wellbeing of his wife and daughter. The joy fatherhood brought Dave was surpassed only by the bliss he experienced in becoming the grandfather of Benjamin David in 2007. From day one his "big dude" had Papa wrapped around his finger. Dave's other life passions included classical music, his Cubbies and Da Bearz, history, genealogy, progressive politics and domestic and international travel. Favorite destinations included visiting his sister-in-law and her husband in Finland, annual fishing trips with his brother in Ontario, and family trips to Isla Mujeres, Mexico. Dave will be remembered for his steadfast dedication to his family, his comedic genius featuring an endless font of pun, and his enormous heart. He gave generously to many and possessed the moral integrity of a King. He was admired for his encyclopedic knowledge on a vast variety of topics and could single-handedly beat his wife's entire extended family in Trivial Pursuit.

On January 7, 2022 his heart gave out, pursuant to his Schmidt genes and being no longer able to bear the great sentiment it contained for his loved ones. He was predeceased by his beloved mother Mary Louise, his grandparents, most notably Nellie "Gram" Franz, dear parents-in-law Lyle and Dorothy Birkenholtz, and his father and stepmother Laverne and Kay Schmidt. Left to carry on his legacy are wife Karen, daughter Natalie and grandsons Benjamin Rivera and Steven Melendez, brother John (Cindy) Schmidt of Montgomery, IL, sister Barb (Tom) Davis of Dexter, IA, in laws Ken (Rita) Birkenholtz of Indianola, IA, Kathy (Tero) Hietanen of Helsinki, Finland and Kay (Tom) Timmons of Pleasant Hill, IA along with his nieces and nephews Kim, Sari, Tomas, Jonathon, Korey, Joe, Jim, Julie and Jennifer and their spouses and children. Honorary children include Sami Oroski of Espoo, Finland, Caroline Westlund of Ratorp, Sweden, Sarah Suter of Reconvilier, Switzerland, Katja Janerki of Helsinki, Finland, Sofia Jorstig of Orebro, Sweden, Miguel Rivera of Des Moines, IA and Juan Francisco Rivera of Santa Tecla, El Salvador.

According to his wishes he will be cremated. Ashes will be spread on his mother's grave in Dixon, IL, Ontario, Canada and Isla Mujeres, Mexico. Memorials in his honor may be directed to the American Civil Liberties Union. A visitation with the family will be held on Tuesday January 11, 2022 from 6-8 at the Coburn Funeral Homes in Prairie City.

What will always stand out to me about David is his deep love for his family, his wit and knowledge on so many topics.

David exuded goodness, love, integrity and generosity. In so doing, he has always inspired me to being a better person myself. Knowing such a man always served as a beacon of hope and strength for me.

Though I came into David's life as one of his grandson Ben's Pre-School and then Music Teachers, David and family accepted and welcomed me into the life of their family as an honorary family member.

I am proud to be an on-going friend of David's family members. I am proud that David and I were friends. To his family who carries on David's legacy, I mourn with you our shared loss of this good man. I celebrate and remember with you the beauty of this man who lived his life so well.

The attached photos are added to the memorial of David Michael Schmidt to help share their legacy.